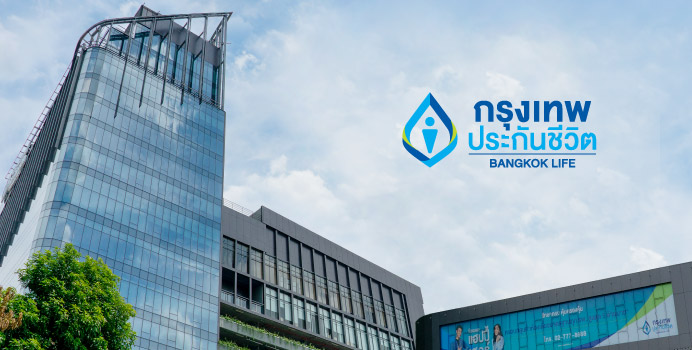 June 1st, KrungSiam Life Assurance Company Limited started its business at office no.732, Charoenkrung Road, Samyak Pranakorn, with a logo of an elephant in a radiant circle and the name written in Thai, Chinese and English.

Mr.Chin Sophonpanich, being a visionary, saw that it was the right time for the Company to earnestly conduct life insurance business. He, therefore assigned IFCCA through Mr.Vai Vathanakul, along with Mr.K. V.Claridge F.I.A., Swiss Re-Insurance Company’s actuarial science specialist, to restructure and reorganise the Company.

April 1987, the Company relocated from Charoenkrung Road to the Bangkok Insurance Building on Silom Road. During this time, the Company grew rapidly. The growth rate of its performance in average of these three years was as high as 90%, propelling the Company into medium-sized business companies of the country.

December 1st, 2003 The Company was awarded an ISO 9001: 2000 certified from International Certifications Ltd., Auckland, New Zealand (ICL), for its operation of ordinary life insurance and its services rendered to customers. The Company was the first life insurance company in Thailand to receive this privilege, ISO 9001.

2004 The Company was awarded an honour for its excellent management in 2004 from Office of Insurance Commission.

2005 The Company was awarded third place for its excellent management in 2005 from Office of Insurance Commission.

December 17th, Bangkok Life Assurance Company Limited had registered into a Public Limited Company. This was intended primarily to enhance transparency in its management, audit and enquiry, and to improve work efficiency and services. The Company received an award for being the second best quality life insurance company in terms of management in 2007 from the Office of Insurance Commission.

The Company received a commendation award for life insurance company management in 2008 from the Office of Insurance Commission.

The Company was honoured an award of Life Assurance Company with Excellence in Management, 2nd place, by the Office of Insurance Commission (OIC) In September 3rd, 2012 at Sirikit National Convention Center.

Received an evaluation of “Excellence” for management at the 2012 Annual General Meeting: (AGM) for the second time, as evaluated by the Thai Investors Association, Thai Listed Companies Association and Securities and Exchange Commission.

The Company has been certified as a member of private practice alignment in anti-corruption, by the Institute of Directors of Thailand (IOD).

The Company received 4th recognition award for transparency organisation for 2014 (NACC Integrity Awards 2013), in an honour of ethics and honesty by Office of the National Anti-Corrution Commission.

The Company received the award for “Best Complaints Handling and Resolution Centre” from Office of The Consumer Protection Board and Management System Certification Institution (THAILAND) as the Company has been in long services for finding solutions for customers in complaints and troubleshootings.

The Company has expanded 4 more branches, which are ISO 9001:2008 certified by International Certification Ltd., Auckland, New Zealand (ICL) for common policies operation. The branches are Sriboonrueng, Mahasarakam, Chaiyapoom and Loei. When combined with existing certified branches, there are 46 branches in total.